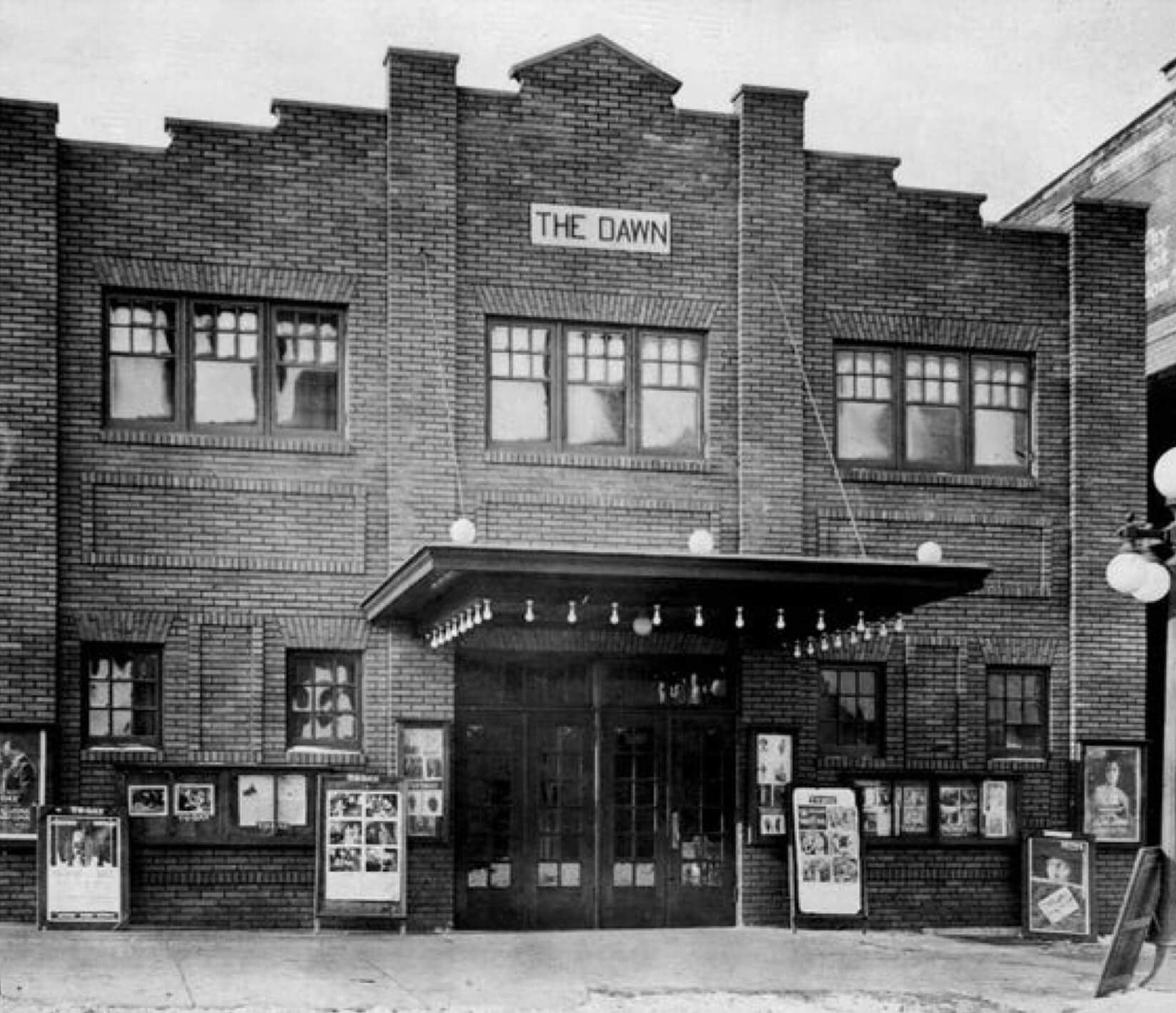 The history of the Dawn Theater

On September 4, 1919, a new venue opened up in the heart of Downtown Hillsdale, Michigan: The Dawn Theater. Intended to be a vaudeville theater, the novelty of silent films quickly became the preferred method of entertainment and the Dawn made the switch to be a silent movie house. The first silent film to be shown in the Dawn theater was “Oh Boy!”

Although the Dawn wasn’t built as a performing art theater, we did have a few traveling acts on our little stage. The first stage production to ever grace The Dawn’s stage was “Robin Hood” put on by the DeKoven Opera Company and tickets cost anywhere between $1.50 and $2.50. The Daily News Review reported on September 22, 1919 that “Despite the drawback members of the company using the marble works for dressing rooms, the wait between the three acts was not tediously long.” The marble works next door refers to an open-air monument company where the actors dressed amidst the demo tombstones.

During the age of silent films, audiences were delighted by this new form of entertainment. But it was missing something…sound. Simple church organs were brought into theaters to accompany silent films, but it still wasn’t quite right. So Wurlitzer partnered with Robert Hope-Jones to create the very first “Wurlitzer Hope-Jones Unit Orchestra" to take silent films to the next level. This “Mighty Wurlitzer” organ was truly a full-scale orchestra controlled by one organist. The instrument was a pipe organ that had brass trumpets, tubas, clarinets, oboes, chimes, xylophones, drums, and many other sound effects. On October 15, 1925, the Dawn Theater got its very own custom-built Mighty Wurlitzer organ and found its voice.

In the early 1900s, Hillsdale, Michigan, being a sizable town, had many opera houses that were converted to movie theaters. However, only the Dawn remained. A few years later in 1929, with the invention of ‘talkies’, the Dawn was converted once again into a theater for early sound movies. At this time, it was very rare to see a movie theater in such a small town. Often, movie theaters were only found in large cities but the popularity of movies had movie theaters popping up in big towns and small communities alike all across America. Movies in the early 1930s were not like the movies we know today. Going to the movies meant that you saw a blend of live and film entertainment. Maybe there would be a vaudeville act, or a musical solo before the feature film began. Our little theater was well suited for these kinds of performances.  In the 30s, they decided that the interior of the theater needed to be renovated in order to improve the acoustics so they covered the original plaster walls with new fiberboard siding. Much later in the 70s, they removed the original Wurlitzer organ and removed the iconic stepped parapet from the top of the building. The brickwork and original windows on the front of the building were covered by more paneling and they installed a plastic and neon marquee.

In 1996, the Dawn Theater showed its final movie and closed its doors. Two short years later, the Dawn became the Roxy- a new nightclub for the downtown scene. The sloped floors were cut into platforms for tables and chairs and all but 20 rows of seats in the balcony were removed. In 2008, the Roxy became the Dawn again under new ownership and reopened officially in 2010 as an event and music venue. The Dawn shut its doors for the final time in 2015.

The City of Hillsdale’s Tax Increment Finance Authority came to the Dawn’s rescue in 2016 when they purchased the building and began the long rehabilitation work on the exterior and interior of the building. Construction officially began in 2020 and was complete in 2021. CL Real Estate Development became invested in the project in 2018 and is the current manager and operator of the Dawn Theater.

During construction, our crews found many interesting artifacts- old movie reels and projector parts, candy boxes from long-forgotten moviegoers, and even some old movie posters from the silent film era tucked under the stage. However, one of the best surprises we found was hiding under the walls. Intended to amplify acoustics, the fiberboard siding had been placed directly on top of the original plaster, and once removed, we unveiled the original stenciling from the 1900s. There is nothing quite like seeing hand-painted stenciling from that era! While the plaster was in bad shape, our artists were able to pull the pattern off the walls and recreate the stencils needed to put the stenciling back on the walls of the Dawn.

Today, the Dawn Theater is open for business once more as a mixed-use event space and music venue. There are also fundraising efforts on behalf of the Friends of the Dawn Theater in place to restore the Dawn’s Mighty Wurlitzer organ and bring it back to the theater. Currently, the Dawn Theater’s One Man Orchestra organ is in storage waiting to be restored. Upon restoration, it will be returned to the theater and it will become one of less than 20 unique organs that remain in their original theater and in their original condition.